We are making progress, people. The show has been unofficially officially announced (meaning it’s not a secret and word is getting around). Flyers will go up after school vacation next week, announcing the kick-off meeting on Feb. 27. So those of you who were worrying (what me, worry?) that we weren’t going to get this show off the ground, you can relax now. 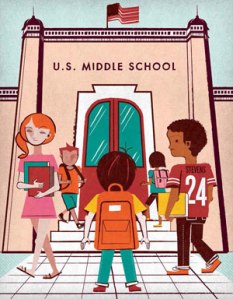 Illustration by Scoty Reifsnyder from a Harvard Education website

Looks like the show will be for grades 9-12. This is a conundrum every year, because our Smalltown school is a combined middle/high school. The drama program has had every possible variation of grades over the years, from grades 4-8 to 4-12 (that was a stretch) to 8-12. Legally Blonde has some mature bits, so keeping it to high school is probably the right move.

Smalltown’s school is small — only 500 kids for the middle and high schools (grades 6-12). So the upside of including middle schoolers is more cast members. But middle schoolers can be a pain, not fully matured emotionally, mentally, or talent-wise. But you didn’t hear that from me.

Here’s how the Crudup Drama Club responded to the addition of middle schoolers to their program, in Bit Players, Bullies and Righteous Rebels, the second book in the Bit Players series:

“Why are we doing that?”

“You think that’s a good idea?”

“They’ll slow everything down.”

“Yeah, and they’ll steal parts from the ones who’ve been doing this since the beginning,” said Ben, jamming his glasses up his face with extra force.

“Easy, easy,” Mr. Ellison said, control of the situation slipping from his grasp. “We could do with a few more people. This will be a good thing.”

“Wait a minute,” Jocelyn said. “Doesn’t the new music director have a daughter in eighth grade? That obnoxious one who thinks she’s Selena Gomez? That’s why we have to have middle schoolers in the show, isn’t it?”

“My little sister’s in her grade. She says the girl – Ada, I think – insists she got an audition with The Disney Channel,” Ben said.

“Yeah, right. It was probably one of those scams where they charge you five-thousand dollars to go to a workshop and then tell you to go home, they’ll call you,” I scoffed.

“Which they never do,” said Kristina. We shared embarrassed glances, not caring to admit that both of us had bugged our parents to let us go to those very same workshops when we were younger…